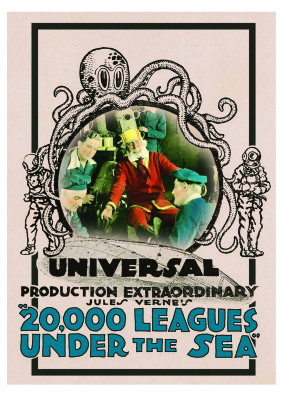 Stuart Paton’s 20,000 Leagues Under the Sea (1916) is an epic retelling of Jules Verne’s classic novel, shot on location in the Bahaman Islands. Allen Holubar stars as the domineering Captain Nemo, who rescues the passengers of an American naval vessel after ramming them with his iron-clad, steampunk submarine, The Nautilus. Incorporating material from Verne’s Mysterious Island, the film also follows the adventures of a group of Civil War soldiers whose hot-air balloon crash lands on an exotic island, where they encounter the untamed “Child of Nature” (Jane Gail). Calling itself “The First Submarine Photoplay Ever Filmed,” the film is highlighted by stunning underwater photography (engineered by Ernest and George Williamson), including an underwater funeral and a deep sea diver’s battle with a giant cephalopod. In honor of the film’s extraordinary technical and artistic achievement, 20,000 Leagues Under the Sea was added to the National Film Registry by the Library of Congress.