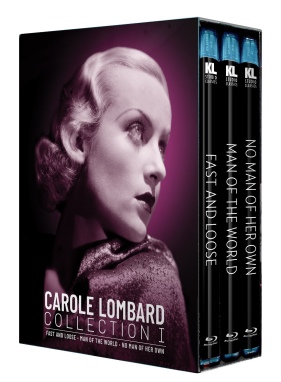 This collection includes three 1930s Pre-Code classics starring screen legend Carole Lombard. FAST AND LOOSE (1930) You can buy anything you want… except love! Carole Lombard (Nothing Sacred), Miriam Hopkins (Becky Sharp) and Frank Morgan (The Good Fairy) star in Fast and Loose, a raucous and romantic pre-Code comedy. Marion (Hopkins) and Bertie (Henry Wadsworth, Applause) are the irreverent children of Bronson Lenox (Morgan), one of the wealthiest men on Long Island. When Marion abandons her family’s aristocratic lifestyle for humble car mechanic Henry Morgan (Charles Starrett, Our Betters) and Bertie begins to keep company with chorus girl Alice O’Neil (Lombard), Bronson will do anything to shoot down Cupid’s arrows. Wonderfully directed by Fred C. Newmeyer (Queen High) and co-starring Winifred Harris (Night Must Fall) as the matriarch of the Lenox family. MAN ON THE WORLD (1931) Screen legends and real-life husband and wife William Powell (The Thin Man) and Carole Lombard (My Man Godfrey) light up the screen in the unforgettable pre-Code romance Man of the World. Michael Trevor (Powell) and his partner Irene (Wynne Gibson, City Streets) run a tabloid in Paris and make their living blackmailing rich Americans. When Michael falls for Mary Kendall (Lombard), the niece of one of his targets, he vows to leave behind his selfish ways to be with her. The jealous Irene, however, will stop at nothing to sabotage their plans for a new life together. The on-screen chemistry between Powell and Lombard was real—the couple fell in love and married shortly after the filming of the movie. Man of the World was marvelously directed by Richard Wallace (The Young in Heart) and written by legendary screenwriter Herman J. Mankiewicz (Citizen Kane). NO MAN OF HER OWN (1932) Legendary Hollywood couple Clark Gable (Run Silent, Run Deep) and Carole Lombard (Made for Each Other) illuminate the screen in the romantic pre-Code drama No Man of Her Own, their only film together. When New York con man Babe Stewart (Gable) decides to lie low in a small town, he falls for a librarian (Lombard) seeking adventure and a way out of her predictable existence. Gambling on marriage, they head back to the city, where Stewart tries to hide his former life from his new bride. Featuring the scandalous “Lombard on a ladder” scene, which prompted the founding of Hollywood’s League of Decency, No Man of Her Own captures two of the silver screen’s most popular stars at their best. Splendidly directed by Wesley Ruggles (Cimarron) and co-starring Dorothy Mackaill (Kept Husbands).