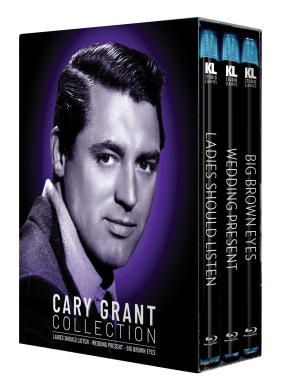 This collection includes three Cary Grant classic comedies from the 1930s. LADIES SHOULD LISTEN – Screen legend Cary Grant (The Eagle and the Hawk, Arsenic and Old Lace) stars in Ladies Should Listen, a romantic comedy about a frolicking bachelor’s complicated escapade in Paris. A meddling switchboard operator (Frances Drake, Mad Love) falls in love with Julian de Lussac (Grant), a tenant in her building who has a deceiving girlfriend. Armed with the truth, she decides to win over Julian’s love and affections by formulating a plan to interfere and expose her conniving scheme. Directed by Frank Tuttle (This Gun for Hire) and co-starring Edward Everett Horton (Bluebeard’s Eighth Wife), Ladies Should Listen is a classic laugh-a-minute farce. Fighting the good fight in the name of love has never been funnier! WEDDING PRESENT – Screen legends Cary Grant (North by Northwest) and Joan Bennett (Big Brown Eyes) star in the fast-paced screwball comedy Wedding Present. Chicago newspaper reporters Charlie Mason (Grant) and Rusty Fleming (Bennett) never let a good story get in the way of a prank. Things change, however, when their editor (George Bancroft, Old Ironsides) quits and Charlie takes over for him. Returning from a month’s vacation, Rusty discovers fun-loving Charlie has become an unbearable tyrant. Disgusted by his behavior, Rusty leaves for New York where her hasty engagement to a stuffy author (Conrad Nagel, Hell Divers) brings Charlie to his senses as he pulls out the stops to change her mind. Character-actor greats Gene Lockhart (Miracle on 34th Street) and William Demarest (The Miracle of Morgan’s Creek) co-star in this wonderful romantic comedy directed by Richard Wallace (Man of the World). BIG BROWN EYES – From Raoul Walsh, the legendary director of The Big Trail, The Roaring Twenties, High Sierra, White Heat and The World in His Arms, comes this snappy comic mystery starring screen greats Cary Grant (Charade) and Joan Bennett (Wedding Present). When her bickering banter with police detective Danny Barr (Grant) loses Eve Fallon (Bennett) her job, the brassy blonde manicurist turns up the heat when she signs on as a New York crime reporter. When a shootout between a pack of thieves ends with a racketeer (Walter Pidgeon, Man Hunt) getting away with murder, Danny and Eve join forces chasing down clues to bust the gang of crooks and see that justice is served. Co-starring Lloyd Nolan (The House on 92nd Street).