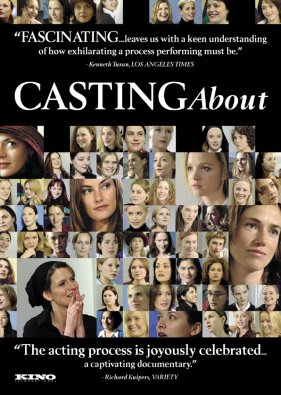 Please note the release date is 1/8/08, we cannot offer Holiday Delivery for Casting About

“A striking piece of work,” (Ty Burr, The Boston Globe) Casting About is a lyrical documentary that explores the captivating experience of casting actors. Shot from the point of view of indie director Barry J. Hershey, the film organizes audition footage of many actresses trying out for three roles in a dramatic film. By weaving together interviews, monologues, and scene work, Hershey has created an impressionistic collage of the casting experience that exposes the “bizarre mating ritual between actor and filmmaker” (Tim Grierson, LA Weekly) while celebrating the unique spirit of the young performers who go through it.

In late 2000, Hershey set out to cast actresses for a fiction film that he had co-written and intended to direct. The plan was to incorporate some of the casting footage into the dramatic film. After reviewing more than 70 hours of audition tapes, which captured actresses from Berlin, Boston, Chicago, London, and Los Angeles, a decision was made to shape this rich material into a film of its own. Creating a film about casting fulfilled an idea arising from Hershey’s first experience with auditioning at film school more than 20 years earlier.

The result is a “fascinating” and “remarkable” (Kenneth Turan, Los Angeles Times) documentary that puts the viewer in the filmmaker’s seat, where we see the actors at work and learn about their lives, vulnerabilities, and fears. Above all, Casting About moves beyond concepts about the value and power of good acting — so essential to the filmmaker’s art — into “universal questions about surface beauty, inner depth, and the double-edged sword of following a dream.” (LA Weekly).