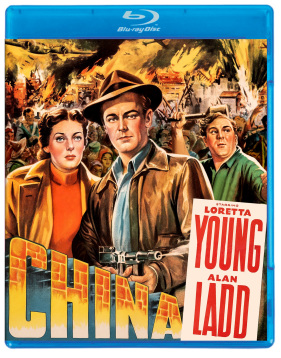 From John Farrow, the acclaimed director of Wake Island, Calcutta, The Big Clock, Night Has a Thousand Eyes and Alias Nick Beal, comes this explosive wartime epic starring Loretta Young (The Stranger, The Farmer’s Daughter) and Alan Ladd (O.S.S., This Gun for Hire). Ladd plays an American gasoline salesman in 1941 China who supplies his wares to the highest bidder—in this case, the enemy Japanese. His unbiased business philosophy is tested on a trip to Shanghai when he meets an American schoolteacher (Young) and her Chinese students who tell him of Japanese cruelty. In a surprise show of fierce allegiance, he joins a band of Chinese guerrillas on a daring heist. Co-starring William Bendix (Lifeboat) and featuring masterful cinematography by Leo Tover (Hold Back the Dawn), this action-packed tale carried a Hollywood record of using seventy pounds of precious, rationed gunpowder.