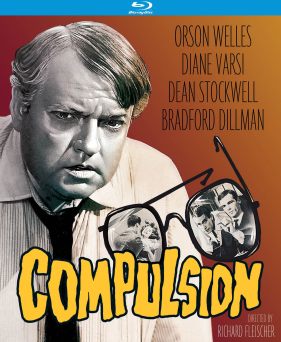 Sometimes murder is just a way to pass the time! The great Richard Fleischer (The Vikings) directed this riveting true story about the notorious 1924 Leopold/Loeb murder case. Hollywood Icon Orson Welles (The Third Man, Touch of Evil) stars as the brilliant Clarence Darrow whose history-making defense against capitol punishment saved two Chicago teenagers from a death sentence. Though names were changed, this factual and fascinating character study focuses on the two boys - one bossy and intimidating (Bradford Dillman, The Mephisto Waltz), the other sensitive and introverted (Dean Stockwell, Married to the Mob) - who thought their superior intellect would enable them to pull off "the perfect crime. This tense, intelligent re-enactment of what was seen as the crime of the century, co-stars Diane Varsi (Peyton Place), E.G. Marshall (12 Angry Men), Martin Milner (TV's Adam-12 and Route 66), Gavin MacLeod (TV's The Love Boat and The Mary Tyler Moore Show) and Richard Anderson (TV's The Six Million Dollar Man and The Bionic Woman).