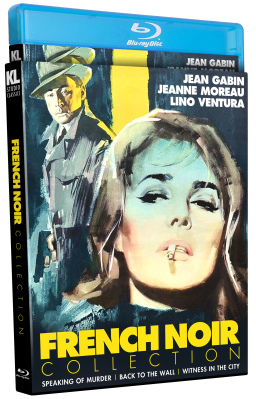 This collection features three film noir classics from France. SPEAKING OF MURDER (1957) a.k.a. LE ROUGE EST MIS – From acclaimed crime writer Auguste Le Breton (Rififi, Bob Le Flambeur) comes this gripping noir thriller starring cinema icon Jean Gabin (Rififi in Paris, The Sicilian Clan). Louis Bertain (Gabin) is the owner of a Paris garage which serves as a front for a gang of thieves. He and his accomplices are careful to keep up a civic veneer by day, indulging in criminal activities only when “the red light is on” at night. This status quo is upset when one of the gang members becomes convinced that Louis’ younger brother is a police informer. Featuring taut direction from Gilles Grangier (The Night Affair) and excellent supporting turns by Paul Frankeur (Touchez Pas Au Grisbi), Marcel Bozzuffi (Illustrious Corpses), Lino Ventura (The Valachi Papers) and Annie Girardot (Maigret Sets a Trap). BACK TO THE WALL (1958) a.k.a. LE DOS AU MUR – Screen legend Jeanne Moreau (Elevator to the Gallows, Seven Days... Seven Nights) stars in this twisty, mood-drenched film noir from acclaimed crime writer Frédéric Dard (Rendezvous). When wealthy industrialist Jacques Decrey (Gérard Oury, Sea Devils) discovers that his wife (Moreau) is having an affair with a young actor, he decides to exact revenge by blackmailing her under an assumed identity. In the film’s bravura introductory sequence, we witness Jacques meticulously disposing of a corpse—just a taste of the pitch-black intrigue to follow in director Édouard Molinaro’s (Witness in the City) stylish tour de force, featuring dazzling black-and-white cinematography. Co-starring Philippe Nicaud (The Mysterious Island) and Claire Maurier (The 400 Blows). WITNESS IN THE CITY (1959) a.k.a. UN TÉMOIN DANS LA VILLE – Based on a novel by the legendary Thomas Narcejac (Diabolique, Vertigo, Eyes Without a Face), this dark tale of vengeance stars the great Lino Ventura (Razzia Sur La Chnouf, A Pain in the Ass) in an early leading role. Industrialist Pierre Verdier kills his mistress Jeanne Ancelin by throwing her off a train. Her husband (Ventura) decides to take revenge on his wife’s murderer, who has been acquitted by justice. Directed by Édouard Molinaro (Back to the Wall) and shot by Henri Decaë (Diabolically Yours), Witness in the City is a pulse-pounding film noir set on the grim and gritty streets of Paris. Co-starring Fellini favorites Sandra Milo (8½) and Franco Fabrizi (I Vitelloni), with Jacques Berthier (Shoot First… Ask Questions Later), Daniel Ceccaldi (Rififi in Paris) and Françoise Brion (L’Immortelle). All three films were restored in 2K.