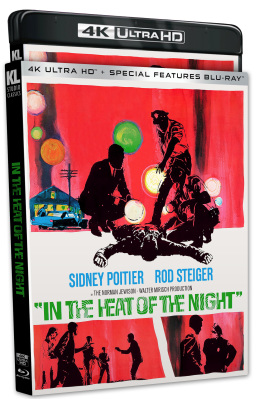 In the Heat of the Night 4KUHD

This undisputed masterpiece from director Norman Jewison (The Thomas Crown Affair) is one of the most radical and acclaimed movies of its generation. Rod Steiger (A Fistful of Dynamite) gives an Oscar-winning performance as a sheriff from small-town Mississippi who finds himself in an uneasy alliance with a black homicide detective from Philadelphia—strikingly portrayed by Sidney Poitier (Lilies of the Field). In the course of investigating the crime, the two strong-willed men must reconcile their inherent prejudice towards each other. The final result is justice—and an unlikely but touching mutual respect. Supporting performances by Warren Oates (Bring Me the Head of Alfredo Garcia) and Lee Grant (The Landlord), an evocative score by Quincy Jones (The Getaway) and vivid cinematography by Haskell Wexler (The Conversation) all add to the film’s authentic aura of a hot summer evening in the Deep South. Winner of five Academy Awards including Best Picture for Walter Mirisch (The Great Escape), Best Adapted Screenplay for Stirling Silliphant (Charly) and Best Editing for Hal Ashby (The Cincinnati Kid), In the Heat of the Night is a blistering commentary on race relations and a landmark in entertainment. This 4KUHD special edition also includes the In the Heat of the Night sequels They Call Me Mister Tibbs! and The Organization on the second Blu-ray disc.