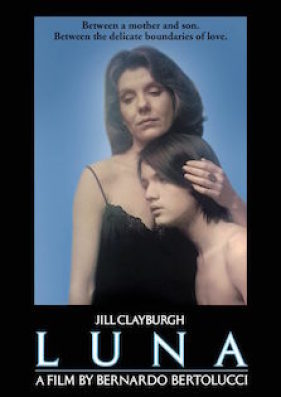 Legendary filmmaker Bernardo Bertolucci (The Last Emperor) directed this controversial drama starring the great Jill Clayburgh (Starting Over). Luna explores the troubled life of Joe Silveri, a teenager (Matthew Barry, The Wraith) and his troubling relationship with his parents, including an incestuous liaison with his mother. After witnessing his father’s suicide, mother and son decide to move to Italy. Joe falls in with the wrong crowd and becomes addicted to heroin. Caterina, hoping to lure her son back to a healthier and safer lifestyle, tries to become closer to him, which leads to flirtation and incest. Written by Bertolucci, his brother, Giuseppe Bertolucci (1900) and Clare Peploe (Zabriskie Point) and based on a story by the Bertolucci brothers and Franco Arcalli (Once Upon a Time in America). Stunning cinematography by the great Vittorio Storaro (Apocalypse Now) and a beautiful and haunting score by the renowned composer, Ennio Morricone (The Good, the Bad and the Ugly). The Amazing cast includes Tomas Milian (The Big Gundown), Fred Gwynne (The Munsters), Alida Valli (The Third Man), Renato Salvatori (State of Siege), Franco Citti (The Decameron) and Roberto Benigni (Life is Beautiful).