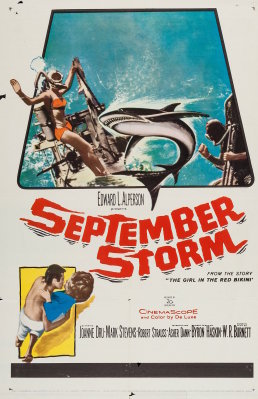 This drama of treasure hunters exploring the Mediterranean Sea was the last 3-D picture filmed in the 1950s, and the first to be released in 3-D CinemaScope. Hoping to impress New York model Joanne Dru, sailor Asher Dann borrows his boss’s boat; con men Mark Stevens and Robert Strauss convince the couple to search for a fortune in sunken gold coins. Director Byron Haskin is best known for the 1953 classic THE WAR OF THE WORLDS; the script is by noir legend W. R. Burnett (THE ASPHALT JUNGLE, HIGH SIERRA). The first feature to include color underwater 3-D footage, SEPTEMBER STORM was long considered lost until the original negative elements were located for this digital restoration. - American Cinematheque