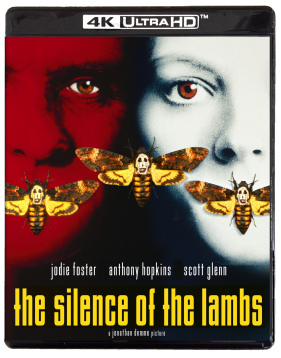 The Silence of the Lambs (30th Anniversary)

Screen legends Jodie Foster and Anthony Hopkins deliver sensational, Oscar-winning performances in this spellbinding thriller based on the bestselling novel by Thomas Harris (Red Dragon, Hannibal). A psychopath nicknamed Buffalo Bill (Ted Levine, Heat) is murdering women across the Midwest. Believing it takes one to know one, the FBI sends trainee Clarice Starling (Foster, The Accused) to interview a demented prisoner who may provide clues to the killer’s actions. That prisoner is psychiatrist Dr. Hannibal Lecter (Hopkins, Nixon), a brilliant, diabolical cannibal who agrees to help Starling only if she’ll feed his morbid curiosity with details of her own complicated life. As their relationship develops, Starling is forced to confront not only her own hidden demons, but also an evil so powerful that she may not have the courage—or strength—to stop it! This terrifying masterpiece co-stars Scott Glenn (The Challenge) and garnered five Academy Awards, including Best Picture, Best Director for Jonathan Demme (Philadelphia) and Best Adapted Screenplay for Ted Tally (Before and After), becoming only the third film in history to sweep the top five categories.