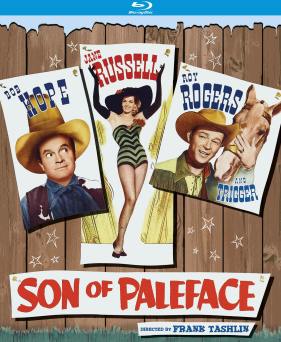 Four years after his smash comedy hit, The Paleface, Bob Hope (My Favorite Brunette) returned to the screen as Junior Potter, son of Painless Peter Potter, the hapless hero of the first film. The Harvard-bred Junior heads out west to claim his father's inheritance. Also returning for the sequel, but in a different role, is the beautiful Jane Russell (The Outlaw) as a gunfighter named Mike ‘The Torch’ Delroy who continually has to save our hapless hero with help from the king of the singing cowboys, Roy Rogers (Sunset in the West) and legendary horse Trigger (Trigger, Jr.) who team up with the pair to get to the bottom of a gold shipment robbery. Co-written and directed by the great Frank Tashlin (Will Success Spoil Rock Hunter?) and featuring a stellar supporting cast which includes Bill Williams (The Cariboo Trail) and Douglass Dumbrille (Mr. Deeds Goes to Town) with cameos by Bing Crosby (Road to Rio) and legendary director Cecil B. DeMille (Samson and Delilah).