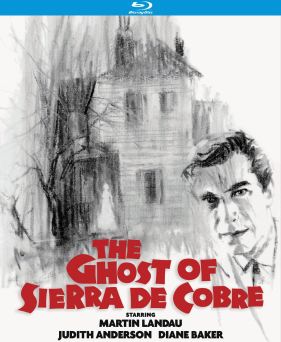 BRAND NEW RESTORATION IN 2K! Legendary writer and producer Joseph Stefano (Psycho and TV’s The Outer Limits) and star Martin Landau (TV’s Mission: Impossible and Space: 1999) originally shot this controversial cult classic as a pilot for a potential TV series called The Haunted, a new show similar in concept to The Twilight Zone and The Outer Limits, but with much more focus on horror. The pilot was not picked up, so after adding some additional scenes, The Haunted became The Ghost of Sierra de Cobre. Robert Stevens (TV’s Alfred Hitchcock Presents and The Twilight Zone) started directing the pilot, but became very ill and was replaced by producer Stefano. Terrified of being buried alive, a young woman installs a phone in her crypt. A few days after her untimely death, the phone suddenly rings and paranormal investigator Nelson Orion (Landau) is brought in to probe the case. Stunningly shot in black-and-white by renowned cinematographers William A. Fraker (Rosemary’s Baby) and Conrad L. Hall (In Cold Blood). The stellar cast includes Diane Baker (Mirage) and Judith Anderson (Rebecca).