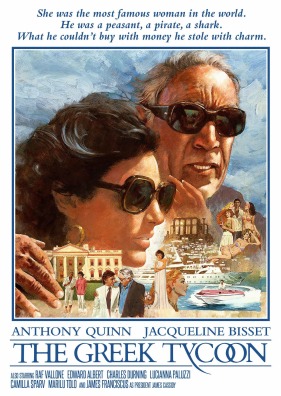 She was the most famous woman in the world. He was a peasant, a pirate, a shark. The Greek Tycoon is the story of their fiery romance. Anthony Quinn (Zorba the Greek, The Passage, Lust for Life, Lawrence of Arabia) portrays Theo Tomasis - the world’s richest and most flamboyant shipping magnate. He’s a man who seemingly has everything he could want - who reaches out and captures his final prize: lovely, expensive, legendary Liz Cassidy (Jacqueline Bisset, Bullitt, The Sweet Ride, The Deep, The Grasshopper), widow of a president of the United States. This lavishly mounted drama, which focuses on the international jet set’s continual struggle for love and power, also stars Charles Durning (Twilight’s Last Gleaming, Dog Day Afternoon, Stand Alone), James Franciscus (Killer Fish, The Cat O’ Nine Tails, Beneath the Planet of the Apes), Edward Albert (Butterflies are Free, Galaxy of Terror, The Domino Principle), Raf Vallone (The Italian Job, Cannon for Cordoba, Harlow), Luciana Paluzzi (Thunderball, The Green Slime, The Klansman), Camilla Sparv (Assignment K, Dead Heat on a Merry-Go- Round) and directed by the legendary J. Lee Thompson (The Guns of Navarone, The Passage, Cape Fear). Now see the film for the first time in the U.S. in widescreen and from a brand new 2K scan!