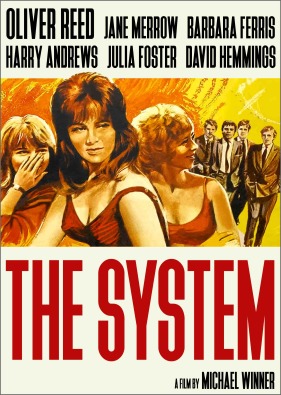 The System AKA The Girl-Getters

From Michael Winner, the acclaimed director of The Jokers, Hannibal Brooks, The Nightcomers, Scorpio, The Stone Killer and The Big Sleep, comes this mischievous comedy, the first of six collaborations between the director and star Oliver Reed (The Hunting Party, The Devils). Reed is the leader of a gang of handsome but unscrupulous young bachelors, who spend a hot summer on a seaside resort in pursuit of women—including Jane Merrow (The Lion in Winter) and Barbara Ferris (A Nice Girl Like Me). One of the gang, jealous of Reed’s success, uses their “system” to hoist the leader on his own petard. Shot on location in Devon by the great Nicolas Roeg (The Masque of the Red Death, Fahrenheit 451) before he turned his attentions to directing, The System, released in the U.S. as The Girl-Getters, boasts a fine supporting cast, including Julia Foster (Alfie), Harry Andrews (The Hill) and David Hemmings (Murder by Decree).