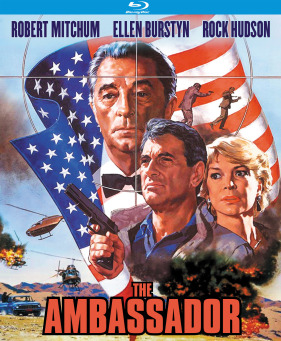 An American ambassador, his wife, and her Arab lover are caught up in a dangerous game of intrigue, extortion, and murder, in this action-packed thriller set in the explosive Middle East. U.S. Ambassador Peter Hacker (Robert Mitchum, Nightkill) has traveled to Israel on a vital mission to initiate peace talks between young Israelis and the P.L.O., but his burning idealism is largely unwelcomed in the region. He’s stalked by assassins of unknown allegiance and blackmailers photograph his wife (Ellen Burstyn, The Exorcist) in bed with her lover (Fabio Testi, The Big Racket), who proves to be a Palestinian leader. Aided by a security officer (Rock Hudson, Hornets’ Nest) and by the Israel Defense Minister (Donald Pleasence, River of Death), Hacker seeks to save his marriage, his career and the region before his many foes succeed in eliminating him. Filmed in Israel, The Ambassador is tautly directed by J. Lee Thompson (The White Buffalo) and features Rock Hudson in his final screen performance. Based on a novel by Elmore Leonard (52 Pick-Up).