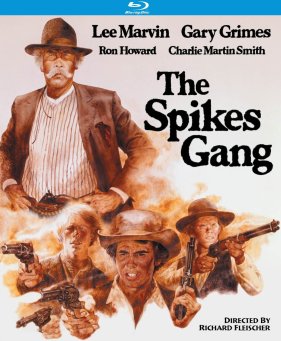 Screen icon Lee Marvin (Monte Walsh, Prime Cut) gives a spellbinding performance as Harry Spikes, a wounded outlaw on the run who appears as a romantic figure to three impressionable youths, played by Ron Howard, Gary Grimes) and Charles Martin Smith (Starman). Nursed back to health by the boys, the crooked Spikes enlists them as his partners - then callously betrays them after they rob a few banks and mayhem ensues. Legendary husband and wife writing team of Irving Ravetch and Harriet Frank Jr. (Hud, The Reivers) wrote the screenplay based on the novel by Giles Tippette. The great Richard Fleischer (The Vikings) directed this great western featuring stunning cinematography by Brian West (Wake in Fright) and a stellar cast that includes Noah Beery Jr. (The Rockford Files) and Robert Beatty (2001: A Space Odyssey).