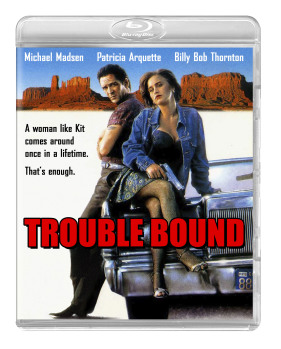 A Code Red Release – A woman like Kit comes around once in a lifetime! Ex-con Harry Talbot (Michael Madsen, Reservoir Dogs, The Hateful Eight) can't believe his luck. In a power game, he took two losers for five thousand dollars, a classic convertible Lincoln Continental and met a hot young thing, Kit Califano (Patricia Arquette, True Romance, Lost Highway). As it turns out, Harry ends up the loser, as in the trunk rests the rotting corpse of a man known as Gordo. To make matters worse, the men who put Gordo there want him back and Kit is out to kill a gangster kingpin. What was supposed to be the beginning of a new life for Harry has now become a high-speed struggle for survival - as he's pursued by crazed drug dealers, vicious Mafia hit men and maniacal family members. Co-starring Billy Bob Thornton (Sling Blade, A Simple Plan) and Seymour Cassel (Rushmore, The Killing of a Chinese Bookie).