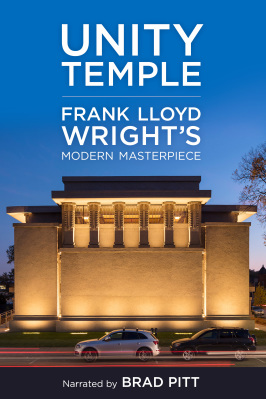 In UNITY TEMPLE: FRANK LLOYD WRIGHT'S MODERN MASTERPIECE, filmmaker Lauren Levine follows the challenging $25 million restoration of Wright's first public commission and the painstaking efforts to bring the 100-year-old building back to its original beauty. Now part of the UNESCO World Heritage site, The 20th Century Architecture of Frank Lloyd Wright, Unity Temple was wildly experimental for its time and in the words of Wright himself, it "makes an entirely new architecture -- and is the first expression of it." Unity Temple is widely considered a Wright masterwork and a vastly influential forebear of the modern architecture movement. Five years in the making, Levine's film weaves interviews and Wright's own philosophy with detailed footage of the restoration process. With narration by Oscar and Emmy award-winning actor Brad Pitt, a Wright acolyte himself, the film creates a passionate multi-perspective statement not only for the beauty of the building but the ways that architecture continually alters the world within and around it.