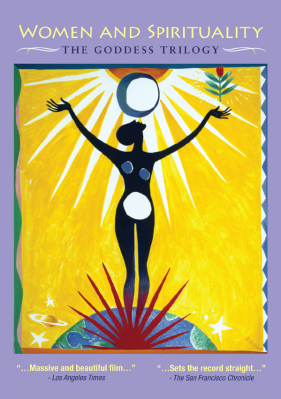 Women and Spirituality: The Goddess Trilogy

Women and Spirituality is Donna Read's definitive series that explores the power of the sacred feminine in mythological, historical and cultural contexts. This trilogy investigates the relationship between women and spirituality from ancient times to the present.

Goddess Remembered - Part 1 - This poetic documentary is a salute to 35 000 years of "pre-history,"; to the values of ancestors only recently remembered, and to the goddess-worshipping religions of the ancient past. Goddess Remembered features Merlin Stone, Carol Christ, Luisah Teish, Starhawk, Charlene Spretnak, and Jean Bolen, who link the loss of goddess-centred societies with today's environmental crisis. They propose a return to the belief in an interconnected life system, with respect for the earth and the female, as fundamental to our survival.

Burning Times - Part 2 - This beautifully crafted film is an in-depth look at the witch-hunts that swept through Europe just a few hundred years ago. False accusations and trials led to massive torture and burnings at the stake, and ultimately to the destruction of an organic way of life. The film advances the theory that widespread violence against women and the neglect of our environment today can be traced back to those times.

Full Circle - Part 3 - In this stirring documentary, authors, teachers, social activists and feminists explore manifestations of contemporary women’s spirituality in the Western world. Drawing on the customs, rites and knowledge of the past, Full Circle envisions a sustainable future where domination is replaced with respect. At the centre of these discussions is a reverence for the Earth, a sacred circle which we must protect.