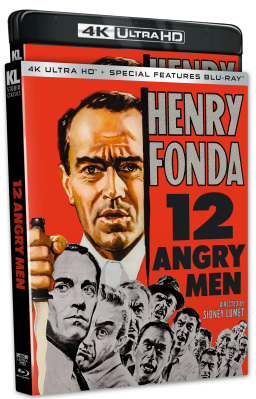 Available: Apr 18th 2023. Pre-orders are generally sent several says in advance of street date. Order may not be split.

Following the closing arguments in a murder trial, the twelve members of the jury must deliberate, with a guilty verdict meaning death for the accused, an inner-city teen. As the dozen men try to reach a unanimous decision while sequestered in a solitary, sweltering room, one juror (Henry Fonda, The Ox-Bow Incident) casts considerable doubt on elements of the case. Personal issues soon rise to the surface, and conflict threatens to derail the delicate process that will decide one boy’s fate. In addition to Fonda (who also co-produced with writer Reginald Rose), the cast includes Lee J. Cobb as his main opposition; Ed Begley as a hateful bigot; E.G. Marshall as a cold, logical stockbroker; Jack Warden as a baseball fanatic and Jack Klugman as the disturbed blood-brother to the defendant. The feature directing debut of Sidney Lumet (Serpico, The Verdict), 12 Angry Men remains “one of the best pictures ever made” (The Hollywood Reporter), a searing examination of race, justice, family and morality.