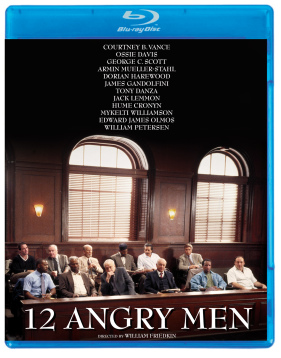 The combatants: a dozen strangers. The stakes: life and death. Screen legends Jack Lemmon (Some Like It Hot) and George C. Scott (They Might Be Giants) head an all-star cast in this taut, emotionally charged courtroom drama that is as powerful as the original was when it first burst upon the screen. A young man stands accused of fatally stabbing his father, and his fate now lies in the hands of twelve men from all walks of life, each with his own agenda, fears and personal demons. Fortunately, this is an open-and-shut case. Or is it? As the evidence is painstakingly scrutinized, tensions mount and tempers rise... and the twelve jurors are forced to confront their secret frailties and bitter prejudices in an unrelenting struggle for the truth. The phenomenal cast includes Courtney B. Vance (Dangerous Minds), Ossie Davis (Jungle Fever), Armin Mueller-Stahl (Eastern Promises), Dorian Harewood (Full Metal Jacket), James Gandolfini (TV’s The Sopranos), Tony Danza (TV’s Taxi), Hume Cronyn (Lifeboat), Mykelti Williamson (Forrest Gump), Edward James Olmos (Zoot Suit), William Petersen (Manhunter) and Mary McDonnell (Dances with Wolves). William Friedkin, the legendary director of The Boys in the Band, The French Connection, The Exorcist, Sorcerer and To Live and Die in L.A., takes on Reginald Rose’s riveting teleplay and will keep you on the edge of your seat until the final verdict is in.