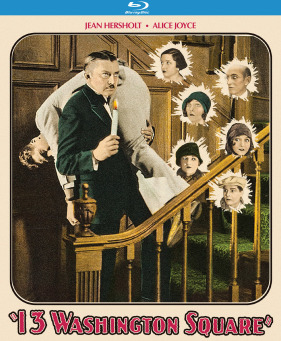 Presented in a 4K restoration from Universal Pictures, 13 Washington Square is a romantic comedy in which a meddling aristocratic mother tries to stop her son from eloping with a grocer’s daughter. So Mrs. De Peyster (Alice Joyce, Stella Dallas) dons a working class disguise and goes on a mission with her maid (an uproarious Zasu Pitts, Ruggles of Red Gap) to track down the lovers and block their illicit vows. But instead she crosses paths with a charismatic thief named Pyecroft (Jean Hersholt, Heidi) who has plans to rob De Peyster’s home. All of them end up at her home on 13 Washington Square where their lies hilariously come to light.