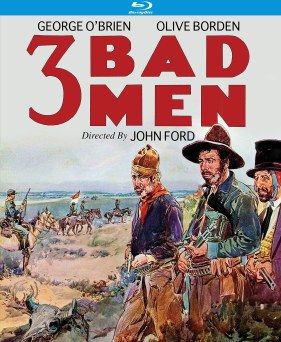 This classic western directed by the great John Ford (The Hurricane) stars George O'Brien (Sunrise) and a host of other greats from the silent era and beyond. When a trio of bandits discovers a young woman (Olive Borden) whose father was murdered by a ruthless gang, the "Three Bad Men" go from being partners in crime to comrades in chivalry. Willing to put their own lives on the line to protect her from a sinister sheriff (Lou Tellegen) and his deranged posse, the men prove that character isn't always determined by which side of the law a man sits on. A grand, picturesque western, this epic stands as one of the legendary director's finest.

"3 Bad Men is a complex, ambitious, yet satisfyingly breezy silent western from film giant John Ford. This flick's got humor, melodrama, thrilling setpieces, and, above all, a well-told story. As long as you aren't prejudiced against silent cinema, you'll have a heck of a good time. Highly Recommended."

"As in so many John Ford films, 3 BAD MEN is loaded with beautifully composed shots of Western vistas. One of the highlights is a recreation of the 1877 Dakota land rush, as stunning a set piece as you ever would hope to see. Indeed, no American filmmaker captures the stark, simple beauty of the American West as John Ford."