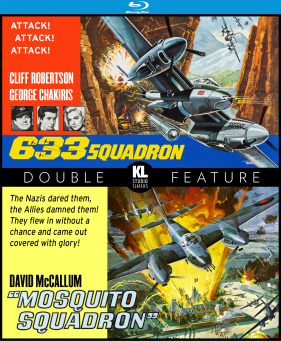 Cliff Robertson (Charly, Midway) and George Chakiris (West Side Story, Kings of the Sun) lead a do-or-die mission in 633 Squadron. The year is 1944, and Allied forces learn that the Nazis are planning to pummel England with an all-out rocket blitz. The only way to stop the threat is to send the Royal Air Force’s Mosquito bombers into narrow Norwegian fjords to create an avalanche that will crush the Nazis’ rocket-fuel plants. Can Wing Commander Roy Grant (Robertson) and the boys of the courageous 633 Squadron pull it off? And if so, will they live to reap the glory? Breathtaking aerial attack sequences featuring authentic period aircraft highlight this pulse-pounding WWII action-adventure. Co-Starring Harry Andrews (The Hill) and Donald Houston (Where Eagles Dare) and directed by television and Hollywood veteran Walter E. Grauman (Lady in a Cage). In Mosquito Squadron David McCallum (The Great Escape, TV’s The Man from U.N.C.L.E.) stars in this epic WWII adventure that perfectly captures the explosive action and emotional torment of war. With its astonishing special effects, stark cinematography and brilliantly choreographed aerial combat sequences, Mosquito Squadron catapults the viewer into the searing heat of battle! As Allied forces struggle against the awesome might of the German Luftwaffe, an even greater threat is posed by the destructive V3 rocket nearing completion at a secret testing center. The Royal Air Force’s Mosquito Squadron gears up to destroy the site, but its leader, Quint Munroe (McCallum), becomes conflicted when he discovers that the air strike may kill hundreds of British POWs—including the squad’s former commander! Co-starring Charles Gray (Diamonds are Forever, The File of the Golden Goose) and directed by television and Hollywood veteran Boris Sagal (The Omega Man).