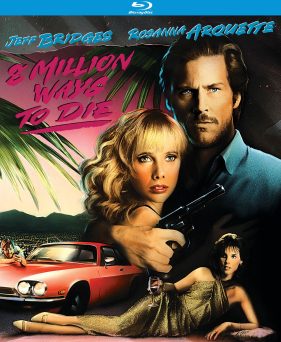 Jeff Bridges (Blown Away), Rosanna Arquette (Desperately Seeking Susan) and Andy Garcia (Things to Do in Denver When You’re Dead) send sparks flying in this electrifying journey into the world of high-priced call girls and million-dollar drug deals. Matt Scudder (Bridges) is an ex-cop with a drinking problem who free-lances on jobs other ex-cops won’t touch. When he accepts a fat fee to help a hooker get free of her pimp, Scudder lands in the middle of a savage drug and prostitution ring and given his past failures, there’s no guarantee he’ll get out alive. 8 Million Ways to Die is a powerful story of personal crisis and riveting police thrillers that will hold you spellbound and leave you breathless. This was the final film credit for the great Hal Ashby (Coming Home, Shampoo) – screenplay by Oliver Stone (Scarface) and R. Lance Hill (Road House) under pseudonym David Lee Henry and based on the book by Lawrence Block (A Walk Among the Tombstones). Co-starring Alexandra Paul (Christine) and Randy Brooks (Reservoir Dogs).