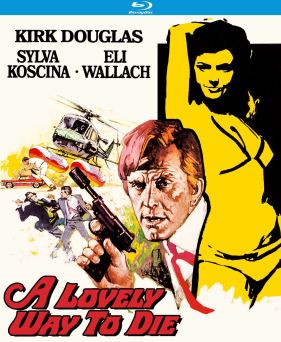 A Lovely Way to Die (Blu-ray)

A Lovely Way to Die stars screen legend Kirk Douglas (Lonely Are the Brave, The Vikings) as Schuyler, a hard-boiled police detective who turns in his badge after charges of brutality are made against him. Hired by a prominent attorney (Eli Wallach, The Good, the Bad and the Ugly), Schuyler is assigned to protect Rena Westabrook (Sylva Koscina, The Secret War of Harry Frigg), a beautiful young woman who is accused of murdering her wealthy husband. While trying to uncover more information about the murder, Schuyler falls for his lovely client and gets embroiled in a murderous scheme of blackmail, deadly secrets and lies. David Lowell Rich (Madame X) wonderfully directed this colorful sixties caper featuring early unbilled screen appearances by Ali MacGraw (The Getaway), Doris Roberts (TV’s Everybody Loves Raymond) and John P. Ryan (Runaway Train).