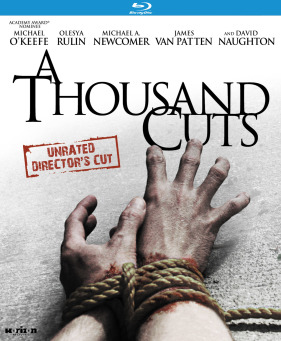 A THOUSAND CUTS is an edge-of-your seat psychological thriller about a stranger with a haunted past who shows up unannounced at the home of Hollywood's newest "A-List" horror movie director, determined to teach him what real horror is all about.

Lance (Michael A. Newcomer) is at the top of the world. He's the hottest Hollywood director of horror in town and a notorious playboy without a care in the world—until Frank, a disturbed party-crasher (Academy Award-nominee Michael O'Keefe, THE GREAT SANTINI, MICHAEL CLAYTON) shows up hell bent on revenge. As the father of an innocent girl who was murdered by a copycat carrying out the kind of murders depicted in the director's "torture-porn" films, both retribution and delusional notions of culpability maniacally drive Frank to torture Lance with methods of the victim's own making, determined to teach the filmmaker the true meaning of horror.