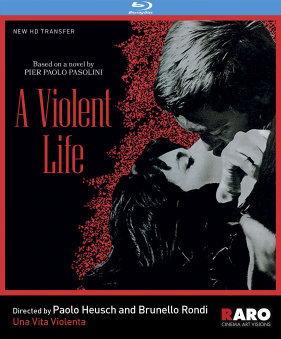 Available: Jan 31st 2023. Pre-orders are generally sent several says in advance of street date. Order may not be split.

Based on Pier Paolo Pasolini’s second novel. A Violent Life (Una Vita Violenta) tells the story of a group of kids who live in one of the poorest and most disreputable neighborhoods in Rome. The story is set at the end of WWII. Thomas lives at the expense of others, like all his other companions, stealing and wasting time. But one day after a theft, Thomas gets arrested. When he comes out of prison he contracts tuberculosis, going through an inner struggle which changes his worldview. He begins to think about his future as a human being and vows to change his life. Hoping to become honest, Thomas gets engaged to the beautiful Irene and also decides to participate in political activity, joining the Communist Party. Then there is a sudden accident, and Thomas once again is faced with the most important challenge of his life.