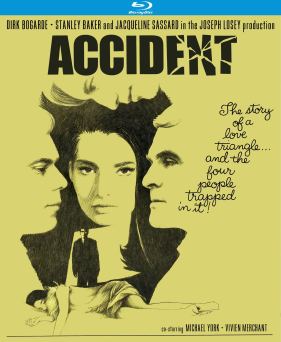 From Joseph Losey, the legendary director of The Prowler, The Criminal, Modesty Blaise, Secret Ceremony and Figures in a Landscape, comes this classic melodrama with a screenplay by the great Harold Pinter (The Birthday Party, The Pumpkin Eater, The Homecoming). When one of his students is killed in a car accident, an Oxford professor (Dirk Bogarde, The Mind Benders) recounts the circumstances of their meeting. But as these turbulent memories unfold, they reveal a series of shocking relationships betrayed by adultery, obsession and self-destruction in which nothing is what it seems and everything has its cost. Accident was the second of three brilliant collaborations between filmmaker Losey and playwright Pinter; the first was the 1963 masterpiece The Servant and the third, the 1971 classic The Go-Between. Stanley Baker (Robbery), Michael York (Something for Everyone), Vivien Merchant (The Maids), Jacqueline Sassard (Les Biches), Delphine Seyrig (Last Year at Marienbad), Alexander Knox (Wilson) and Freddie Jones (Juggernaut) co-star in this stunning 1967 drama that Newsweek called “like a punch in the chest.” Based on a novel by Nicholas Mosley (The Assassination of Trotsky) and beautifully shot by Gerry Fisher (Man on Fire, The Offence).

"The Kino Blu-ray we are privileged to get another revealing audio commentary by one of our favorites, Kat Ellinger. She describes how Accident is extremely faithful to Pinter's play - only one line change at Pinter's wife's (Vivien Merchant) request and agreed to by Pinter. She discusses the prevalent class themes, Kat finds Accident more akin to a European Art Film, that Pinter is difficult to translate beyond the stage as it loses something in translation and significantly more about the cast and production details. Kat's a huge fan of Losey - especially the Pinter collaborations. It is a rewarding listen that adds value to the Kino Blu-ray."