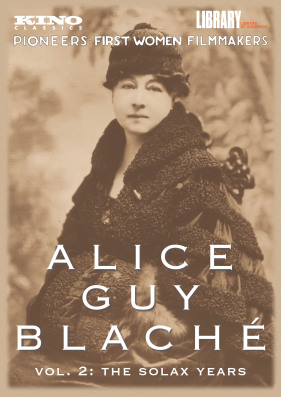 Having pioneered the art and technology of cinema during its infancy (organizing a system of film production at the Gaumont Studios in France), Alice Guy-Blaché moved to the United States where she co-founded the Solax Company, where she served as head of production. Enjoying complete creative freedom, she explored long-form storytelling, alternating between serious dramatizations of the early 20th-century American experience (Making an American Citizen, The Strike, Frozen on Love’s Trail) and playful experiments in melodrama (The Detective’s Dog). Produced more than a century ago, Guy-Blaché’s films maintain their power to surprise the viewer, with moments of unexpected pathos and irreverent humor (the ribald cross-dressing comedies Officer Henderson and Cousins of Sherlocko). This collection is truly an international endeavor—2K and 4K restorations from materials preserved by the Library of Congress, British Film Institute, EYE Film Institute, George Eastman Museum, the Academy Film Library, Lobster Films, and others—and is essential viewing for anyone interested in the evolution of the industry and the art form.