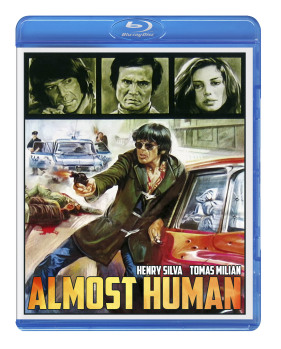 Giulio Sacchi (Tomas Milian, Tepepa, Sonny and Jed, Sex with a Smile) is a psychotic small-time thief with a chip on his shoulder who’s leaving a slew of dead bodies all over Milan. Now he’s got a plan to make a quick and easy jackpot: kidnap the daughter of a local billionaire and hold her for ransom. And nothing is going to stop Giulio from getting his money -- not even Inspector Walter Grandi (Henry Silva, Cry of A Prostitute, Trapped, Foxbat, Shoot, Day of The Assassin), Milan’s toughest cop who’s hot on Sacchi’s trail. Now the police are racing to find the kidnapped girl and stop the ticking human time bomb before he explodes and leaves more death and carnage in his wake. Gritty and exciting, Almost Human is a top-notch Italian crime classic from director Umberto Lenzi (Seven Blood Stained Orchids, Ironmaster) and screenwriter Ernesto Gastaldi (My Name Is Nobody, Case of The Scorpion’s Tail). Filled with tough, brutal and bloody action sequences, it contains a powerful, memorable score from legendary composer Ennio Morricone (The Untouchables, Once Upon a Time in The West) and a supporting cast including Ray Lovelock (Autopsy, The Cassandra Crossing, Murder Rock) and Anita Strindberg (Who Saw Her Die). Tough-as-nails entertainment, Almost Human is always thrilling and now more explosive than ever in a brand-new HD master!