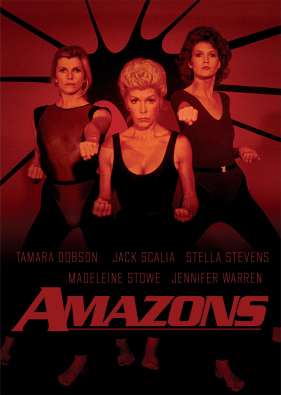 THEIR TARGET: THE PRESIDENT OF THE UNITED STATES… THEIR GOAL: WORLD DOMINATION! When her patient—a prominent U.S. Congressman—dies in a bizarre accident just after surgery, Dr. Sharon Fields (Madeleine Stowe, China Moon) is framed on a charge of malpractice. With the help of Lt. Tony Monaco (Jack Scalia, The Rift), the tough-edged but charming detective assigned to look into the “accident,” the beautiful young surgeon makes a chilling discovery of a secret legion of Amazons, descendants from the legendary nation of women warriors who have vowed eternal war on the enemy race of Man. Now, the President-elect, who has carried into power the first woman Vice President, is slated to be the next “Stallion Kill.” Tense, fantastic, sinister, Amazons is a riveting and fast-paced action-thriller directed by Paul Michael Glaser (Band of the Hand, The Running Man). Tamara Dobson (Cleopatra Jones), Stella Stevens (The Silencers), Jennifer Warren (Night Moves) and Leslie Bevis (Alien Nation) co-star as the leaders of the Amazons. Wonderful score by the great Basil Poledouris (RoboCop) and co-starring William Schallert (In the Heat of the Night), Nicholas Pryor (Risky Business) and Peter Scolari (TV’s Newhart).