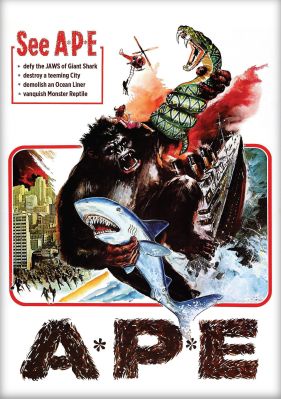 Newly Re-mastered in 3-D and HD! A freighter peacefully glides the still waters of a soft Pacific night; their cargo: a recently captured 36-foot ape. A giant fist comes up through the deck sending the sailors sprawling and in a matter of seconds, the A*P*E (Attacking Primate monster) is loose! After battling a very large snake and a giant white shark, A*P*E defies the JAWS of the great white and is the victor. American actress (Joanna Kerns, TV’s Growing Pains) arrives in South Korea to appear in a film, at the same time, A*P*E has also arrived and lays waste the city of Inchon and continues his march forward, destroying everything in his path. Paul Leder (I Dismember Mama) co-wrote and directed this cult classic that needs to be seen to be believed. Co-starring Hollywood veteran Alex Nicol (The Man From Laramie, The Screaming Skull), A*P*E is presented in both 2-D and 3-D formats (3-D viewing requires a compatible television and Blu-ray player).