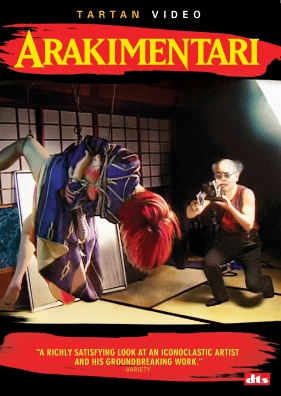 Nobuyoshi Araki is Japan's most famous and notorious photographer. In a culture where complete female nudity is frowned upon even in men's magazines, Araki has been acclaimed and condemned for his photo books and exhibitions which usually focus upon women, usually nude and often in bold (and sometimes disturbing) poses. While he has been decried as a pornographer and a misogynist in his homeland, many others regard him as singular voice in the photographic arena, and many of the women who work with him have spoke of his sincere love and respect for them. Arakimentari is a film by American documentarian Travis Klose which offers a look at the professional and personal sides of Araki, including his background, his relationships with his models, his less well known portraiture and landscape work, and how he spends his spare time. Also included are interviews with several friends and contemporaries, including musician Bjork, photographer Richard Kern, and actor/filmmaker Takeshi Kitano