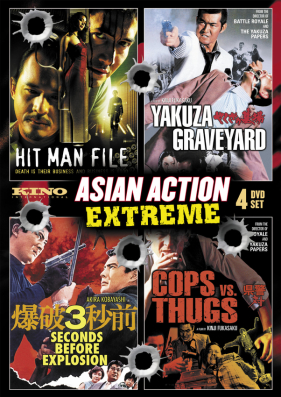 Violent and sensual, Hit Man File is a unique new Asian action film with a distinctive Thai identity. Hit Man File's story of ambition, revenge, murder and sacrifice reveals hypnotic beauty beneath the flash and grit of Bangkok's underworld and explores an unending cycle of life and death that can either destroy or redeem even the most ruthless, cold-blooded assassin.

Forsaking his idealist past, Tanthai has become the Thai underworld's secret weapon: a remorseless contract killer able to dispatch any target -- provided his price is met. But when Beum, a Machiavellian politician, hires Tanthai to eliminate an upstart drug kingpin threatening Bangkok's fragile criminal status quo, the lone wolf assassin's ethical vacuum is inadvertently breached. Caught between rival Triad bosses, mercenary policemen and power hungry parliamentarians, Thailand's deadliest assassin becomes the country's most wanted target. As Bangkok boils over into a full-fledged gang war, Tanthai crosses gun barrels with a rival from out of his past and risks everything to answer a conscience he thought he'd long ago erased.

Tanthai's fight for survival takes him through a twilight world of boxing rings, nightclubs, funeral parlors and gambling dens that "looks fabulous" (Variety). Amidst the light, smoke, water and soil that are the elemental fabric of both Bangkok's notorious vice epidemic and Thailand's eternal splendor, Hit Man File blurs the lines between ceremony and conspiracy, ritual and revenge, desire and destiny. Hit Man File is an intimate one-of-a-kind Southeast Asian gun opera that transforms assassins into pilgrims, politicians into warlords and gangsters into martyrs.

It's 1963 and the Kurashima City yakuza underworld has narrowed to two warring clans. The Kawade gang uses political influence to legitimatize their rackets, while the Ohara group shares an uneasy alliance with corrupt local cops. But when Boss Ohara initiates a bold waterfront land-grab, the precarious balance between gangsters, police, and politicians tips towards a bloodbath. "Drop dead, it'll clean the city," growls the Violence Squad's Detective Kuno to a group of Kawade assassins en route to a night club massacre. But Kuno's own hands are not spotless. Torn between his childhood connections with a yakuza kingpin, mounting pressure from reformer superiors, and the trigger happy gun-lust that led him to the police force in the first place, Kuno occupies the eye of Cops vs. Thugs' full-force hurricane of ferocious action. Coolly supplementing the body count on both sides, Kuno is a quick-triggered pilgrim in a world where, "gangsters and cops are the same. They both respect codes and laws."

A lightning-paced 60’s crime film from Japan’s Nikkatsu Studios, Three Seconds to Explosion packs enough subterfuge and action into its 84 volatile minutes to fill out a dozen pictures made anywhere else.

“I like shady dealings,” purrs undercover superspy Yabuki (Akira Kobayashi – The Yakuza Papers) en route to infiltrating a sadistic, trigger-happy gang of international jewel thieves. Gone renegade from the shadowy espionage bureau that honed his killer instincts to a razor’s edge, the implacable Yabuki teams up with fellow mercenary crime fighter Yamawaki (Hideki Takahashi – Fighting Elegy). Together, they follow a trail of stolen gems leading from the final days of WWII to a contemporary conspiracy that reaches into the highest corridors of corporate power and nefarious international villainy.

NOT GUARANTEED FOR HOLIDAYS