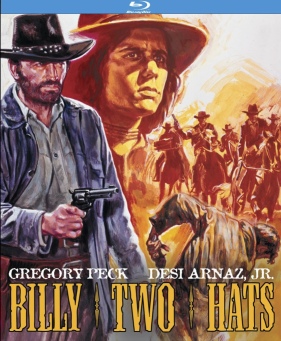 Hollywood legend Gregory Peck (The Purple Plain) stars in this colorful, thrill-packed western produced by legendary filmmaker Norman Jewison (F.I.S.T.) and directed by the acclaimed Ted Kotcheff (First Blood) with a screenplay by the great Alan Sharp (Night Moves). The first western to be shot on location in Israel, it's a grand and glorious adventure pulsating with noble camaraderie, relentless action and forbidden romance. Archie Dean (Peck) and his young partner, Billy (Dezi Arnaz, Jr., House of the Long Shadows), are bandits by trade, staging daring robberies throughout the American frontier. But when their latest heist takes a deadly turn, they are pursued by a ruthless marshal (Jack Warden, The Verdict) who's determined to bring them in - dead or alive! A compelling saga of the wild west that features brilliant cinematography (Brian West, Wake in Fright), rugged landscapes and cliffhanging excitement, Billy Two Hats is dynamic and spellbinding - a must for every western fan. Co-starring David Huddleston (The Big Lebowski).

Trailers for Billy Two Hats, Moby Dick, On the Beach and House of the Long Shadows