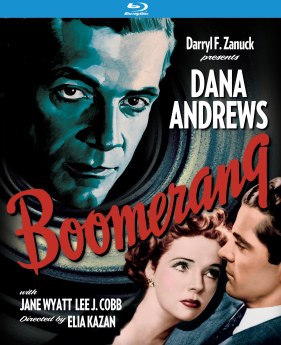 Iconic director Eli Kazan (On the Waterfront) garnered critical acclaim for this vividly portrayed, suspenseful 1947 true crime drama set in Connecticut, where the true events actually happened. When a beloved priest is gunned down, the local police chief (Lee J. Cobb, Man of the West) is under enormous pressure to find his murderer. Based only on vague descriptions by the townspeople, he undertakes a massive manhunt, eventually arriving at two suspects, one denies the crime and the other confesses. The State’s Attorney, Henry L. Harvey (Dana Andrews, Daisy Kenyon) is appointed to the case and faces political opposition in his attempt to prove one suspect’s innocence and other’s guilt. Also starring Arthur Kennedy (Elmer Gantry), Jane Wyatt (Pitfall), Sam Levene (The Killers) and Ed Begley (12 Angry Men) - Boomerang is gripping film noir entertainment from start to finish. Academy Award nominee for Best Writing, Screenplay (Richard Murphy).

"Boomerang is an unusual noir docudrama with fewer of the tropes of the genre than one might find in more typical noirs of the era. The high definition presentation on this Kino Lorber Studio Classics release is a fine one."