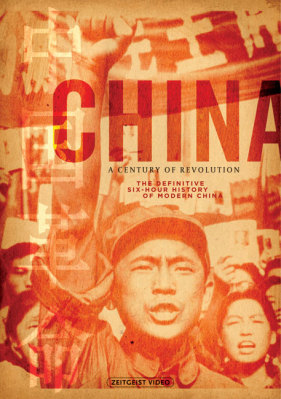 China: A Century of Revolution (DVD)

China: A Century of Revolution is a six-hour tour de force journey through the country’s most tumultuous period. First televised on PBS, this award-winning documentary series presents an astonishingly candid view of a once-secret nation with rare archival footage, insightful historical commentary and stunning eyewitness accounts from citizens who struggled through China’s most decisive century. China in Revolution charts the pivotal years from the birth of the new republic to the establishment of the PRC, through foreign invasions, civil war and a bloody battle for power between Mao Zedong and Chiang Kai-shek. The Mao Years examines the turbulent era of Mao’s attempts to forge a “new China” from the war-ravaged and exhausted nation. Born Under the Red Flag showcases China’s unlikely transformation into an extraordinary hybrid of communist-centralized politics with an ever-expanding free market economy. Monumental in scope, China: A Century of Revolution is critical viewing for anyone interested in this increasingly powerful and globally influential country.