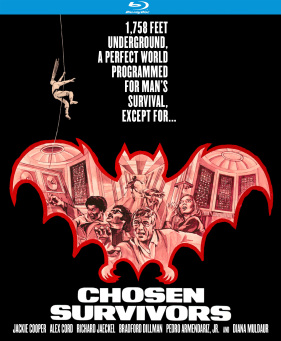 They are mankind's last hope… and the terror has only just begun! After a devastating global nuclear holocaust, a carefully selected group of 11 citizens are sent deep into the bowels of Planet Earth, where they will remain until it is safe to return to the surface and start re-populating the world! But something else is lurking in this subterranean refuge...a deadly, rampaging of inhuman terror that won't stop until it has exterminated them all, one by one! TV veteran Sutton Roley (Combat, Mannix) directed classic Sci-Fi thriller starring Jackie Cooper (Superman II), Alex Cord (The Brotherhood), Richard Jaeckel (The Dirty Dozen), Bradford Dillman (The Enforcer), Pedro Armendariz Jr. (Chisum), Diana Muldaur (McQ), Lincoln Kilpatrick (The Omega Man) and Barbara Babcock (Back Roads).