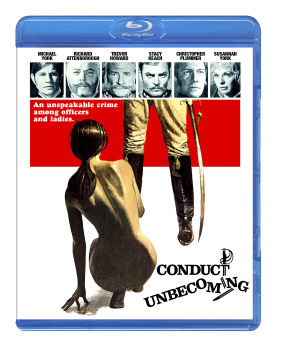 An Unspeakable Crime Among Officer and Ladies! Honor. Duty. Respect. The timeless moral and ethical code of our military—and the backbone of civilized Western society. All are at risk for this British regiment stationed in colonial India at the end of the nineteenth century. The conduct unbecoming: a beautiful widow (Susannah York, The Silent Partner) is brutally attacked by one of the new officers. In a desperate bid to prevent a public scandal, the superior officers Richard Attenborough (Jurassic Park), Trevor Howard (Von Ryan’s Express), Stacy Keach (Road Games) and Christopher Plummer (Murder by Decree) undertake a Court Martial. Can an idealistic young officer (Michael York, Logan’s Run) defend the accused attacker (James Faulkner, Game of Thrones), even if it means shattering the military’s—and his own—code of honor? Conduct Unbecoming boasts a stellar cast in an epic historical drama which will keep you in suspense until the shocking climax. Co-starring James Donald (The Bridge on the River Kwai) and directed by Michael Anderson (Orca, Operation Crossbow, The Quiller Memorandum).