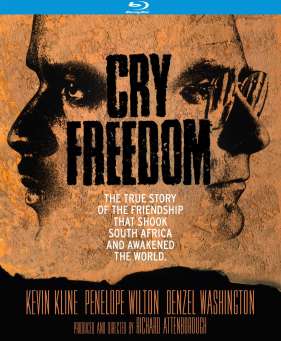 From Richard Attenborough, the acclaimed director of Oh! What a Lovely War, A Bridge Too Far, Magic, Gandhi and Chaplin, comes this epic, Oscar®-nominated drama starring screen greats Kevin Kline (The Big Chill) and Denzel Washington (Mo’ Better Blues). The tension and terror that was 1970s South Africa is powerfully portrayed in Attenborough’s sweeping story of black activist Stephen Biko (Washington) and liberal white newspaper editor Donald Woods (Kline), who risks his own life to bring Biko’s message to the world. After learning of apartheid’s true horrors through Biko’s eyes, Woods discovers that his friend has been silenced by the police. He then undertakes a perilous quest to escape South Africa and bring Biko’s remarkable tale of courage to the world. The riveting true story offers a stirring account of man at his most evil and most heroic. Cry Freedom was nominated for three Oscars®, including Best Supporting Actor (Washington) and Score (George Fenton and Jonas Gwangwa).