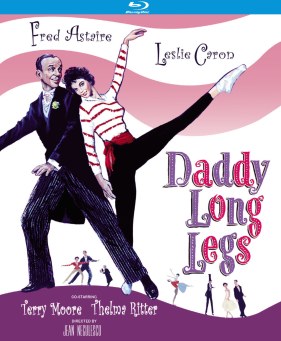 This classic cinemascope musical directed Jean Negulesco (Road House) received three 1955 Oscar nominations and featured the incomparable Fred Astaire (Top Hat) in some of his most stunning dance sequences. Daddy Long Legs follows a young French girl (Leslie Caron, An American in Paris) through college, her education sponsored by a mysterious man with long legs. Millionaire Jervis Pendleton III (Astaire) is from old money, and although generous with his wealth, he must learn how to give of his emotions. Amid sparkling musical numbers and dream sequences, comic relief comes from Fred Clark (Dr. Goldfoot and the Bikini Machine) as Pendleton’s assistant and Thelma Ritter (Pillow Talk) as his secretary. Beautifully shot by the great Leon Shamroy, the cinematographer for The King and I, Cleopatra and Planet of the Apes. Nominations include Best Original Score, Best Original Song, and Best Art Direction.