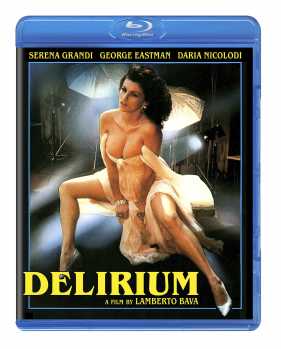 Gioia (Serena Grandi, star of Tinto Brass’ Miranda) is a buxom centerfold working for Pussycat magazine. In such a profession, having an admirer or two is expected, but Gioia’s new admirer is a vicious killer! He murders her fellow magazine models one at a time, using a variety of twisted implements of death. Gioia is the lucky recipient of a collection of photos, each with murdered bodies arranged around posters of her. Renowned Italian star Grandi, known as the Dolly Parton of Italy, leads the cast in this Giallo classic, which features George Eastman (Hands of Steel, Blastfighter, After the Fall of New York, Ironmaster) David Brandon (Stage Fright, Caligula the Untold Story, She), Daria Nicolodi (Deep Red, Tenebre, Inferno, Opera) and screen legend Capucine (The Pink Panther, Red Sun). Delirium was wonderfully directed by Lamberto Bava (Monster Shark, Blastfighter, Ironmaster) – now see this colorful Giallo in HD!