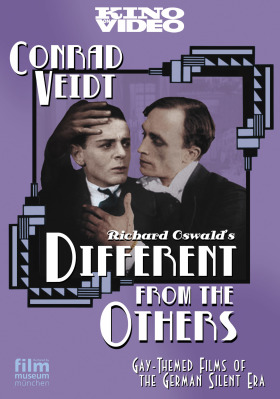 Different from the Others (DVD)

One of the first gay-themed films in the history of cinema, Different From the Others was banned at the time of its release, later burned by the Nazis and was believed lost for more than forty years. Using recently discovered film segments, still photos and censorship documents from different archives, Filmmuseum Muenchen has resurrected this truly groundbreaking silent film for DVD.

Enacted in 1871, the German penal code's Paragraph 175 sentenced thousands of accused German homosexual men to jail terms for "unnatural vice between men." In 1919, director Richard Oswald (Tales of the Uncanny) and psychologist Dr. Magnus Hirschfeld created a film intended to expose the unjust Paragraph 175 and help liberate the "third sex" from legal persecution and public scorn. Different From the Others casts Conrad Veidt (Cabinet of Dr. Caligari) as Paul Korner, a gay concert pianist blackmailed by a closeted low-life named Bollek. When Korner's budding romance with a handsome young music student runs afoul of Bollek's extortion, Korner goes to the German courts for protection. But the draconian Paragraph 175 makes criminals out of both accuser and accused, and the love Korner has found may cost him his career, his freedom or his life.

Conrad Veidt's uncompromising performance (the same year as his legendary portrayal of Cesar the somnambulist in Caligari) places a human face on Hirschfeld's reformist fervor and Oswald's tragic melodrama. In its frank depiction of gay bars, closeted homosexuality, and the suffocating expectations of straight society, Different From the Others is both a fascinating time capsule and a remarkably modern cinematic plea for tolerance and change.