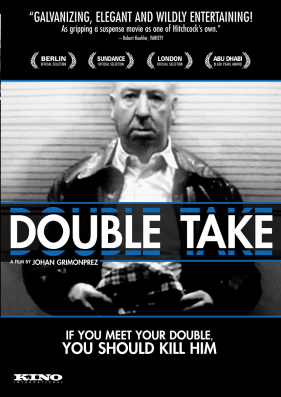 An Official Selection at both the Berlin and Sundance Film Festivals, Johan Grimonprez's Double Take is a unique film that combines early 60's advertising, hysterical Red Menace newsreels, and Alfred Hitchcock - featuring his hilarious introductions to his TV show and movies, and interviews with actual Hitchcock impersonator Ron Burrage - into a black comedy journey through the global commoditization of fear and the slippery politics of images from Sputnik, to the Cuban Missile Crisis, 9/11, and beyond.

With astonishing versatility, this documentary-fiction hybrid ingeniously blends the archive footage with cryptic allusions to an imaginary murder plot involving Hitchcock and his doppelganger to paint a vivid portrait of American media run amok during the Cold War

Though echoing Orson Welles' F For Fake, Jorge Luis Borges' famous false histories, and the collage films of Bruce Connor, Grimonprez's creation is a unique cinematic fever dream that must be experienced to be believed. "Fascinating, confounding, and beautiful" (New York Magazine)," DOUBLE TAKE is a perceptive, multi-faceted gem that's "as gripping a suspense movie as one of Hitchcock's own" (Variety).

"Galvanizing, elegant and wildly entertaining! As gripping a suspense movie as one of Hitchcock's own." - Robert Koehler, VARIETY