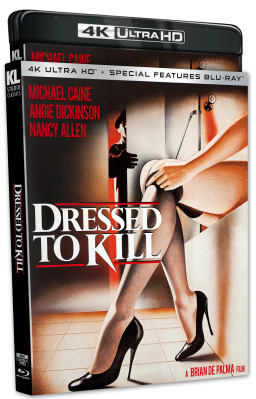 A disturbed woman, adrift in steamy sexual fantasies. A New York psychiatrist who seems to have taken on one patient too many. A beautiful call girl caught between the cops and a vicious razor-wielding killer…and the killer herself: a tall, blonde, elusive psycho named Bobbi. Dressed to Kill contains all the heart-stopping elements of a classic suspense thriller. But writer-director Brian De Palma (Carrie, The Fury, Blow Out, Scarface, The Untouchables) turns up the heat and takes them one step further to create a masterpiece. Screen legend Michael Caine (The Ipcress File, The Italian Job) stars as a fashionable Manhattan therapist faced with a murderous puzzle: the sudden, hideous slaying of one of his patients—with a straight razor stolen from his office. Desperate to find the slasher before anyone else is hurt, the doctor soon finds himself lost in a provocative and deadly maze of obsession, deviance and deceit. Stunningly scored by Pino Donaggio (Body Double) with terrific turns by Angie Dickinson (Pretty Maids All in a Row), Nancy Allen (RoboCop), Dennis Franz (American Buffalo) and Keith Gordon (Christine), Dressed to Kill is a psychosexual tour de force from the modern master of the macabre.