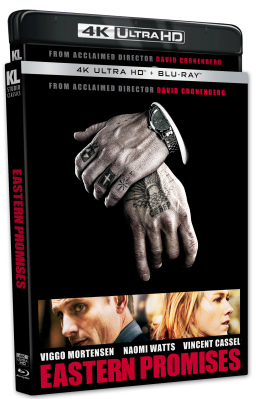 Visionary filmmaker David Cronenberg (Scanners, The Fly) and muse Viggo Mortensen (The Indian Runner, Green Book) follow up A History of Violence with another acclaimed joint effort, the mesmerizing Eastern Promises. Mortensen delivers an Oscar-nominated performance as Nikolai, a ruthless and mysterious Russian who has ties to one of the most dangerous crime families in London. His carefully maintained existence is jarred when he crosses paths with Anna (Naomi Watts, Mulholland Drive, King Kong), a midwife who has come across potentially damaging evidence against the family. Their unusual relationship sets off an unstoppable chain of deceit, death and retribution. Brilliantly written by Steven Knight (The Girl in the Spider’s Web) with terrific supporting turns by Vincent Cassel (Black Swan) and Armin Mueller-Stahl (Music Box), this brooding and provocative masterpiece is “no ordinary crime thriller, just as Cronenberg is no ordinary director” (Roger Ebert). Top-notch cinematography by Peter Suschitzky (Figures in a Landscape, Dead Ringers).