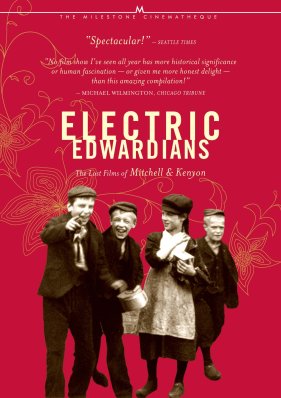 In the early twentieth century, traveling showmen hired pioneer filmmakers Sagar Mitchell and James Kenyon to shoot local footage of people in the north of England going about their daily activities. These films would later be shown at nearby fairgrounds, town halls and neighborhood theaters for workers, children, and all to come see themselves miraculously captured on screen. Preserved and restored by the BFI National Film and Television Archive with a hauntingly beautiful score by In The Nursery, this treasure trove of extraordinary footage provides an unparalleled record of everyday life in the years before World War I. Mesmerizing scenes of trolley cars and crowded streets, soccer matches, temperance parades, throngs of workers leaving the factory and a myriad of simple pleasures transport us to a lost world.

Featurette on the restoration of the films

“Diving Lucy” and additional shorts by Mitchell and Kenyon