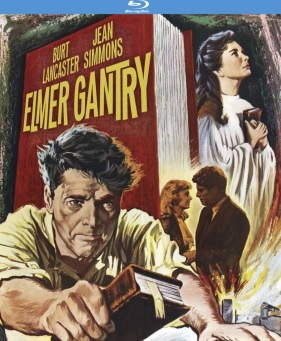 Handsome. Opportunistic. Immoral. Traveling salesman Elmer Gantry (Burt Lancaster, Run Silent, Run Deep) is all this and more. So when he stumbles into a revival meeting and discovers that he can hustle money in a tent-show as easily as in a saloon, Gantry converts to evangelism. Joining forces with Sister Sharon Falconer (Jean Simmons, Spartacus), he delivers demon-bashing oratories that bring him fame and fortune. But when an old flame (Shirley Jones, The Partridge Family) re-appears, Gantry is forced to confront demons of a more worldly order -- long-buried secrets that will make his "saintly" life a veritable Hell on Earth! Wonderfully directed by Richard Brooks (In Cold Blood) and based on the bestselling novel by Sinclair Lewis (Dodsworth). Winner of 3 Academy Awards including Actor (Lancaster), Supporting Actress (Jones) and Adapted Screenplay (Brooks).